Retired FBI Chief Discusses Inside Knowledge of Satanism, Occultism and Pedophilia within the Upper Echelons of US Government 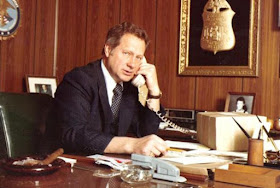 The late Ted Gunderson is considered to be an inspiration to many truth-seekers for numerous reasons. During his time as FBI Chief at Los Angeles, Gunderson was tasked with maintaining justice and security for a large portion of the state of California. His service with the Bureau was notable. However, it was after his retirement that his research and detective work became particularly noteworthy.


Gunderson's service for the FBI gave him detailed insight into both the public side of U.S. government operations as well as the dark underbelly which virtually none of the American public knew about circa 1950. Since Gunderson's passing, many have followed in his footsteps of searching and digging for hidden truth despite the constant efforts of the establishment to ridicule and deter such searches.

Many of the revelations of former Chief Gunderson have now become common knowledge within the truth community. Among the numerous interviews and talks which Gunderson gave, very few may be more relevant to recent disclosures as the one below. In this speech, Gunderson reveals his knowledge of some of the exact same subjects we are now hearing about regarding rampant child trafficking, Satanism, and pedophilia in high places.


Let's consider the facts here. We have Ted Gunderson—the former Chief of the FBI at Los Angeles—sharing his knowledge of the reality of child sex trafficking and Satanic, occultist influence in government. Gunderson comes from a time when the FBI was respectable and dependable in seeing justice served in the United States. The reputation of the Bureau was much different then than it is today. It is clear that he speaks with conviction and forthrightness, and honestly believes the allegations mentioned.

These are the exact same topics we have heard from numerous other whistleblowers and victims of child sex trafficking in the United States. Brice Taylor—a famous survivor of high-profile sexual predators and ritualistic abuse revealed the shocking world of elitists pedophilia, rape, torture and espionage that sits just under the surface of our "civilized" American government.

Ms. Taylor came forward and bravely described her life-long ordeal of sexual slavery, mind-control, and blackmail at the hands of numerous high-ranking political officials and figures in entertainment. (This should sound familiar.) It was Ted Gunderson who assisted Ms. Taylor in bringing her story to light. However, this account has yet to be acknowledged by corporate media.

More recently, the issue of Pizzagate/Pedogate has reached headlines in American media, and predictably, these issue have been swept under the rug yet again. The corporate media seems to have worked overtime the convince the public to ignore the issues of child trafficking and pedophilia within the offices of government. This media follows closely in the footsteps of its predecessors. As we may find through research, the testimonies of Ted Gunderson were ignored and ridiculed in the same way.


The smear efforts against Gunderson were extensive and inhuman. The corporate media of Ted's time did much to defame and attack Ted's character in any way they could. And as per the typical trend, the victory went to the loudest voice speaking. This is many many are still largely unaware of this issues in government.

We have clearly observed the media reveal how  heavily compromised it was during the time of Gunderson's disclosures, and that this compromise led to the successful cover-up of the JFK assassination.

As we might recall, following JFK's murder, anyone who responsibly questioned the mainstream lie about the assassination was labeled a "conspiracy theorist" and ignored. In reality, it was the corporate media that should have been ignored in order for Americans to get to the truth. This was nearly the exact same media we depended upon to report the truth about Gunderson's findings.

Related links - The Podesta Emails; Part One - An Examination of the Hard Evidence Brought Forward by Wikileaks

Those who orchestrated the JFK assassination allegedly took the United States hostage after they successfully eliminating one of their greatest opponents. The media that complicity assisted these criminals in cover up the murder have since passed on their legacy of dishonesty and betrayal to the modern-day corporate media we know today.

This is the media we have to depend upon to tell us the "truth" about the credibility of Gunderson and his eventual murder. The media called the late Ted Gunderson paranoid and a liar. They made his legitimate concerns out to be little more than bedtime stories. So today, seeing that we have the exact same issues of child trafficking and Luciferian occultism in the upper ranks of government, the media predictably chooses to ridicule and ignore the story entirely.

However, despite the dishonesty and lack of dependability of the modern corporate media, the truth has come forward, those responsible have been outed at some level, and it is only those who still cling to the stories of the corporate media that have not learned the true nature of the U.S. government up to this point.

Many believe it is only a matter of time until we see open trials for the criminals who perpetrated the high crimes against humanity and against the U.S. in past years and decades. I am of the opinion that these developments along with their disclosures will happen very soon. And judging from the desperation we have seen in corporate media, on internet forums, and among former government officials to smear and censor all whistleblowers, these revelations and developments appear to be imminent.

The Podesta Emails; Part One - An Examination of the Hard Evidence Brought Forward by Wikileaks

Jimmy Church Welcomes David Wilcock on Fade to Black - The Alliance, the Cabal, and the Current Process of Disclosure - Video, Links, and Analysis

The Reality of Child Trafficking - U.S. and International Statistics for Victims of Global Pedophilia Rings

#PizzaGate - What We Know So Far - Video, Links, and Commentary